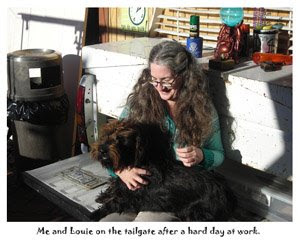 I'm trying to be objective and at the same time, get past being madder than h@$#$^&. I do understand that some folks have a healthy fear of dogs or other animals but still.
Monday, the direct TV guy came out to install new equipment to handle changes in their service. He was supposed to show between noon and 4:00 PM. He rang the doorbell at 4:15 , so I was already a little out of sorts being stuck at the house all afternoon waiting on him. But - I did answer with a smile on my face. He didn't return the smile and that should have been my first clue.
First thing he wants is to go to the backyard. I hadn't counted on that. I figured he could get on the roof via the front. It was the same distance. That flustered me because I didn't know what I was going to do with Louie. "Oh goodness, let me settle the dog down for you so he won't bother you."
"You have to tie the dog up, ma'am," he says without a please, more of an order, snippy voice.
"I have no way to tie him up. He's harmless."
So, I go to the backyard and try to just hold him which is fine. The guy comes back there, sees the dog and freaks. "I told you to tie him up."
Of course, Louis is wagging his tail and wanting to make friends. He barks a little then quits. "Just let him smell you then he'll go sit in his corner and leave you alone."
I let him go, and Louie goes to sniff the guy and the jerk kicks him. "I done told you to put that dog up."
At this point I wanted to cuss the guy from one end to the other. I refrain and put Louie in the closed garage that's probably 100 degrees in hopes that this jerk will get the job done quickly so Louie won't be in there long. If the guy had told me he was afraid of dogs and would I please figure out something, I would have done this to start with. But most folks that come to the backyard, know he's harmless. Even the meter readers. But this guy ordered me and I don't take orders well without a good reason.
"How do I get to the dish?" He scratches his head and looks at the dish mounted on the end peak.
"We have two dishes, one closer to the middle and the one you see. You'll have to get on the roof and not the shed (the shed's butted up to the house and kinda blocking his way). Direct TV said they were replacing both with just the one dish."
"I know how to do my job, ma'am. I don't need you telling me what to do."
Then why the heck did he ask? Okay, he was a jerk before, now he's climbing even higher on the jerk scale. Then the guy has the nerve to ask to use my ladder because he's too lazy to get his out of the truck. "Sure. Knock yourself out. Take whatever you need." Wanna kick my dog again?
I called my husband and told him to get home fast before I really lost it. My man comes to the rescue and I go inside to fume. Kick my dog, will he? I ask my husband later how it went and he said the guy was having a hard day. My husband did most of "his" work for him because my husband is kinda a perfectionist and wants it done right. The serviceman's drill quit working so he had to borrow my husband's. My husband was pretty cool, all things considered, but then he wanted the job done and getting mad and frustrated would not have seen the end result.
Did I mention I'm still mad - a little. And yes, I probably should have put the dog in the garage to begin with but it happened so fast and I've never had to "put the dog away" before. Oh well.
Oh, and a side note, the guy is not employed by Direct TV. They subcontracted out the work since they have so many dishes to replace. Just thought I'd mention that so it wouldn't reflect badly on Direct TV.
Yeah, I think this dude will be the villain in my next novel.
Posted by Ciara Gold at 7:57 AM No comments:

I had to spend the night with mom night before last because she's recovering from knee surgery and doesn't yet want to be alone. Friends and family have been taking turns sleeping over. The next morning though, I check my phone and I have a text.
Text from son: "Badly!" OMG, what happened, so I called him and get no answer. Then I realize this message actually came after another text he sent.
Text from son: "Dad misses you!"
I laughed at that point. The message came at 1:44 AM so I know exactly what the two were up to. They were kicking back a few beers and listening to music. What I didn't know is that my husband played Shania Twain's song, You're Still the One, over and over and over again. He gets sentimental that way.
So last night, he popped the question. "Will you marry me again?" The question was so unexpected, I know my jaw dropped. I recovered quickly. Of course, I said yes. He wants to go to his hometown and get married by his family preacher this time. Too bad I can't fit my wedding dress, but it doesn't matter. I'm very lucky to have a man that thinks I'm special enough to renew vows with.
The romance is still alive at 50.
Posted by Ciara Gold at 7:42 AM 7 comments:

In an effort to minimize time spent updating things, I've decided to change my website some. I had this bright idea that I'd revamp only I didn't know in doing so how much time it would take. Whaaaa. I had to learn a new program. I ended up with a newer version of Dreamweaver and it was so unlike my old version, I got lost. Everything I read said, build it first in Fireworks. Okay. I can do that.
Oh yeah, right. I've always said, I know just enough to get myself into trouble. I had the most trying time getting fireworks into Dreamweaver and then for it to look the way I intended. Okay, so on my browser, Safari, it finally looks right - somewhat. I have no idea how it will look in other browsers. I'm not website savvy enough to do all the tweaking necessary. It's trial and error for me.
Part of my plan includes this blog. Instead of updating my website with news, I plan to put all my newsworthy info here. I want to keep the website cleaner, less cluttered and easier for readers to browse through.
So bear with me while I complete this process. There will be a few pages missing until I get it all done.
Posted by Ciara Gold at 2:45 PM 2 comments: