Please welcome guest blogger, Rhobin Cartwright who has a new release coming in February.  To help her get the word out, I'm posting an excerpt along with the cover art for her new release.

Renna felt as lifeless as Sen's cold body on the bed next to her. She packed her possessions in her travel bag with careful precision. They were few enough. Everything else belonged to the ship, or the crewkin as a whole, so reverted to Markham Company. Renna didn't care. She needed no reminders. The vision of the bodies of her kin, removed one after another from this hospital room promised memory enough.
"You can't survive." 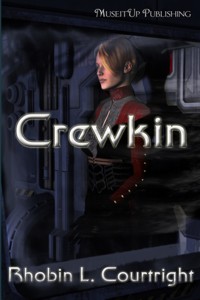 The doctor echoed Sen's last warning. A glance showed the doctor, leaning against the door, watching her, waiting. She didn't know his name. He never identified himself. Another anonymous Markham employee, dressed in a Markham medical uniform, as foreign to her as everyone else.
Years of ingrained prohibitions prevented the response screaming inside. She controlled her voice. "You recommend I join Sen, join my crew?" Like you and your staff encouraged her? Helped her? A final joining? Bastard. Renna closed her bag.
Truth struck her. I don't want to. I'm afraid of dying. Coward. She couldn't look at Sen, loyally joined with her dead kin.
"Where will you go? You are genetically unfit to live planet-side and mentally unprepared to interact with another ship's crew. Crewkin are longhaulers, not shortrunners. We recommend a final joining because we know you won't fit in."

Renna looked around the windowless, beige room, now mostly empty with her kin and their hospital beds removed. Only Sen's bed and hers remained. Sleeping alone in a bed had seemed so strange. Perhaps another unspoken means to encourage her kin to their final joining? Although her eyes burned, she held no more tears.
"My problem, doctor." Me, mine, my, such strange pronouns after we, ours, and us- now unimportant, like everything else.
Renna snapped the closures on her bag and turned to the door. He remained, relaxed against the doorframe.
"The staff understands your pain, no matter what you think. I've seen kin like you before. You're conditioned to survive within your own society. Believe me, we only want to provide for your needs, for your comfort."
Renna looked away, escaping his gaze. No. Not me. Her kin, her future, her known existence ended with Markham3's failure, yet she refused the doctor's cure. In the awkward silence, she left. He didn't move as she passed. She sidled around him to prevent any touch. He huffed, shaking his head in unvoiced comment on her defiance.

For more information on Rhobin and her work, you can find her at http://www.rhobinleecourtright.com/. For information on Crewkin, http://museituppublishing.com/
Posted by Ciara Gold at 7:08 PM 6 comments:

The Keeper of Moon Haven was nominated....

For best novel of the year for Champagne Books!!!!! 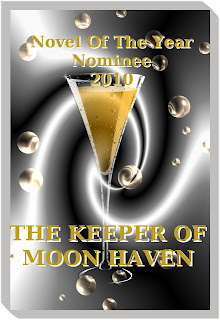 Pesto Packing Mama by Nan D. Arnold
The Lancaster Rule by T. K. Toppin
Shadow Of Guilt by Michael Davis
I am currently reading Shadow Fox though I can't tell you much about it yet as I just started, but so far it's promising to be a great story. I've read Tolan's first book in the series and if Defiant Dancer is anything like his first, Blade Dancer, he's definitely got a great book there. Don't know a lot about Nan Arnold's writing or that of T.K. Toppin, but when time allows, I'll check them out.
And then there's Big Mike as we fondly call him. He and I exchanged critiques recently on upcoming work and I have to say, I'm most impressed with the way that man's mind works. He's a gifted writer and a wonderful friend and mentor, so yeah, I've got some stiff competition with Shadow of Guilt.