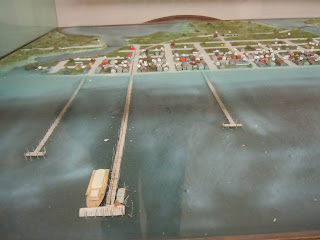 So one of the things I learned when I made my trip to the Calhoun County Museum is that the town was laid out much differently than I assumed. Unfortunately that meant some major tweaking where my story was concerned.

This was a recreation scale model of the town and since it was in a class container, the pic isn't all that clear but it will give you some idea of the docks. The longest dock actually has railroad tracks on it as the train would pull up right next to the ships so they could load and unload freight.

The town moved from higher ground to this area next to Powderhorn Bayou which unfortunately aided in their demise. The elevation was much lower and a prime target for the flooding the hurricane would bring.
Posted by Ciara Gold at 3:14 PM 4 comments: 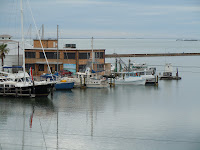 Got back from my vacation ready to plow into my wip and finish that baby. Hubby and I tootled down to the coast and spent three nights enjoying the scenery and good food. Of course, we had to share with the ton of college kids on spring break but we only had one bad night of no sleep where the party next door got rather loud and obnoxious. And dang - they didn't invite the old folks. What's up with that?


Our first day took us to Port A. The weather was rainy but we didn't mind. We were there to just relax and hang out. 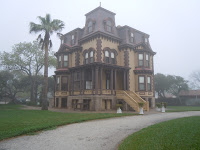 The following day, we headed to Fulton and had the best seafood. I'm still stuffed just thinking about it. We went to the Rockport museum and refreshed our memories on La Salle's Belle. I'd gone about 15 years ago with a group of students to see the excavation. Very interesting as they'd created a void in the ocean around the Belle's reckage so they could excavate. We took a boat and could see down into the cofferdam they'd built. After this field trip, we took another to TAMU and saw how they were preserving the various items rescued from the find. We also went to the Fulton Mansion, a very impressive Victorian structure. 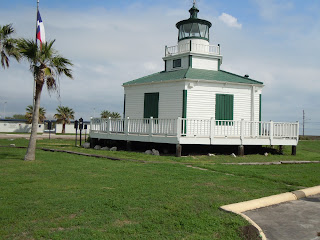 The next day we spent at Port Lavaca where we saw the Halfmoon Reef Lighthouse. It survived the hurricane of 1875 at Indianola so this fascinated me. We had to wait until the following day to visit the Calhoun County Museum where I could really find the information I was seeking.

So - with that, I'm going to post the rest tomorrow. Off to enjoy a date with my mother.
Posted by Ciara Gold at 8:44 AM No comments:

How 'bout an excerpt? 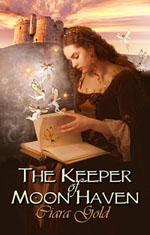 Given it's such a lovely spring day here in Texas and I just love the cover of The Keeper of Moon Haven as it reminds me of spring, I thought an excerpt might be fun.  This one occurs after Noreen reads from Belatania's Diary over and over again in an effort to summon the Keeper. Of course, he's rather stubborn and doesn't come right away but waits until she's almost hoarse.

With bent head, she continued, determined to read the entire passage once more. “Sir Fenot! Come quick!”
“Wizard Tartel Fenot froze at the terror he heard in the child’s voice.” A deep, masculine voice read in unison with her own, then continued when she stopped reading. “Only fear for his life would garner such strong emotion in the young elf.”

She whirled toward the sound and shrieked. Jumping from the rocker, she turned her back to the man and slammed the book shut. A cloud of dust flew. Panting, she set the heavy book on the bed and leaned over it. Merciful heavens, the man had been bare-chested. She closed her eyes and fanned warm cheeks.

“Is that anyway to greet a guest?”
She shrieked again, picked up the book, and held it like a shield.
“Ssh. You’ll have the entire household here posthaste if you keep crying like a banshee.”

She froze. Her breath came rapid and loud. Slowly she turned to face the intruder, keeping her eyes averted. She couldn’t stare at the man because of his state of undress, but she couldn’t turn her back on him either. Her gaze fixed on his face. “What do you want?”


“Want?” The corners of his lip lifted. “I was under the impression, ’twas the other way around. I believe you summoned me.”

The book slipped from her fingers and landed with a thud on the hard floor. The Keeper? No, it couldn’t be. Her gaze fastened on the now closed book. Why was he still here if she’d broken the bridge? She’d expected another troll, not a virile man. What sort of monster had she summoned? How could she make him leave?

The floor creaked. Her gaze snapped to his. Without thought to her own state of dishevelment, she shrugged out of her dressing robe and shoved it at him. “The—the least you can do is cover yourself.”

He inspected the frilly robe and laughed, a hearty rumble that sent goose-chills along her arms. “While I appreciate the offer, I couldn’t possibly fit into such a small and dainty garment.”

All coherent thought fled. What should she do? A man stood before her, a man with hardened muscles
the color of over-creamed tea. Dark, swarthy. She thought of pirates of old. Her gaze trailed upward, following the stark indentions that defined each muscle. Shadows caressed smooth skin and accentuated the hard planes of his body. Corded neck muscles flowed gracefully into a square jaw
line. Full lips and a bent nose lent him a sinister appearance. Obsidian eyes glittered from behind thick, black lashes.

She’d never before been so intrigued by a man’s looks, but tonight she found herself staring with more appreciation than was seemly. Magnificent, the man arrested her attention when propriety dictated she should look elsewhere.

When it was discovered she’d not only seen but conversed with a troll and an elf, she’d be locked away in an asylum for the insane. And now? Merciful heavens, now, she entertained a half nude man in her bedroom and she, a maiden still. She knew well the repercussions from such a scandal. Hadn’t her sister suffered a similar fate? Oh, the irony.

The Keeper of Moon Haven can be found at Amazon and All Ebooks Romance.

Posted by Ciara Gold at 2:31 PM No comments: