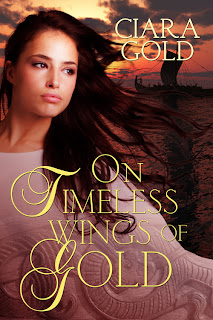 And once again, Amanda Kelsey has created a wonderful cover for On Timeless Wings of Gold! This book will release on November 7 so in anticipation, I'll leave you all with the blurb and excerpt:


Blurb:
They say an eclipse yields a powerful force, an energy that can be harnessed by those with magic in their souls. On such a day when the sun disappears behind the shadow of the Earth, a mighty wizard evokes the elements of nature. With ancient, Celtic incantations, he sends an angel upon the wings of time to tempt a fallen king.
Angel Cashion is struggling to make ends meet and saving for when she can own her own repair shop in hopes of fighting her ex for custody of their daughter, but she is whisked away from home by a quirk of fate. Torin O’Faelain has spent the past two years enslaved by Vikings. A man of strong principles, Torin is committed to finding his way back to his native land and nothing will stand in his way, not even an angel from the future, but love and fate intervene.
Excerpt:
“Ye’re a bold one and have much to learn. Come.” He placed his large hand at the small of her back and gave a gentle shove. If he had to suffer her presence, at least she could perform duties befitting a woman. “’Tis time you earned your keep. A fine meal would no’ be amiss.”

She snorted. “Unless you have a ready supply of frozen dinners and a microwave, don’t get your hopes up.”

He had no idea what microwave meant but didn’t feel inclined to ask.  Her tone implied an aversion to domestic chores, something he’d have to cure her of right soon.

They reached the hut, and he hesitated. “Did ye leave behind a husband? Wee bairns to care for?”

Instant pain filled her eyes. She turned her back and lifted the flap. “Nope. Not even a goldfish. At present the only love in my life is T-Bone.”

An odd stab of jealousy hit him at the mention of a love interest. He shook it off as nothing more than weariness. When she would enter, he stayed her hand. “Nay. I would set rules afore ye abide in my home.”

She dropped the rawhide and held up her hands. “Fine. Whatever floats your boat. I’ll play your way until it no longer suits me.”

The girl’s nonchalance and dismissive words stirred his anger. Suddenly having his own slave gave him a sense of power he hadn’t expected. Under Erik’s rule and now Rurik’s, he’d forgotten how it felt to be in charge, to make decisions and have no one gainsay him. “Slaves canno’ choose when to quit being a slave.”

“Did someone forget to oil your squeaky parts?” She tugged at her ear as if her hearing had deceived her. “You keep spouting the same nonsense.”

Nonsense? Did the girl not understand that certain things could mean life or death in this harsh land?

He grabbed her chin, forcing her attention. “Ye’ll obey my every command or find your stay most unpleasant. I ken that certain tasks might prove difficult, but I’ll no’ tolerate laziness or lack of respect.”

Angel’s eyes widened, and she nodded. “Yep, you definitely need the squeaky parts oiled,” she muttered beneath her breath.


Not fully understanding, he ignored her odd comment. She twisted from his grasp and followed him inside, her manner more subdued. If she only knew how her presence frightened him. Already, he felt protective of her, even attracted to her. The witch had cast a spell, one not to his liking.
“Only a weak man uses his physical strength against a woman.” She stroked her jaw with nimble fingers. “Are you weak?”

By the saints, she dared much. “Do you accuse me of being less of a man?”

“Touchy.” She glanced off to the side. “I’m not handling this—you very well. You’re overreacting to everything I say. Usually, overreaction is a symptom of fear.”

That she touched upon the truth made his insides curl.


A curtain of black hair swept across her back as she tilted her head and laughed. When she quieted, she pierced him to the core with her dark, brooding eyes. “I’m just as frightened as you. I suppose that gives us common ground on which to proceed.”
Posted by Ciara Gold at 7:37 PM 2 comments:

Thought I'd pop in and give an update of what I've been up to. Basically, a little bit of everything. Currently I'm working on two westerns at the same time while editing a book by a friend. I know - I should be working on my fantasy, the sequel to The Keeper of Moon Haven and I will. It's halfway written but I need to be able to concentrate, to be able to give it my all. The fantasies and sci-fi's require more from me with regard to imagination. The westerns require more from me with regards to research so there it is in a nutshell.

And then there's the historical western/fantasy that bridges both genres. Ha ha. Yep, I started working on it also and have about 12,000 words. So - I'm thinking I might not have much coming out in 2012 but look out 2013. "Grin"
Posted by Ciara Gold at 5:51 PM 1 comment: