Nope, not talking about liquid spills. Talking about wood shavings.
I learned something new today! I love when I learn something new. There are certain items we take for granted even when writing historical fiction. Fire is one. I always assumed the fire would be there when needed. If the fire wasn't already going in the story, then flint?

I never even thought to do a history search on matches, but after today's brief visit with our local tool expert, I did just that. First evidence of a match is around 577 in China but then the miracle was lost and it wasn't until 1826 that matches were re-invented. Even then, they probably weren't used much until after 1860.

In the meantime, what did folks do to preserve the fire? One thing they used was a "curfew", a fire cover. At night, the coals were raked to one side and placed in the chimney recess, then covered to keep it going until dawn. But let's say you need to light a candle. That's where the spill comes into play.

Woodworkers would plane wood and the spill or curled shavings from the wood would be saved and kept in a special cup. They could then use these curled bits of wood to carried the flame from one location to another. Spill planes were built just for planing the wood to get these special curls.

My buddy came into my art room to show me his handbuilt spill plane and proceded to give me a brief history lesson at the same time. Wow. Just amazed. So yeah, my next historical will mention spills.
Posted by Ciara Gold at 7:26 PM No comments:

This is my new mantra for the year. If I tell myself this often enough, it must be true. Right?

I've been doing basically the same things for 25 years, but all of a sudden things at work are changing. Next year, I'll be in a new room with new duties. I may have to teach a new course. My best friend at my school is moving to the new school they just built. I've also gained new responsibilites.

Don't get me wrong. I love challenges but don't hit me with them all at once. Yikes!

On the other hand, all of this change is giving me a ton of new ideas for various characters. I'm at 60,000 words on my newest wip with hopes of wrapping it up at 80,000. My goal is to finish the story by spring break. Wish me luck.
Posted by Ciara Gold at 8:53 PM No comments:

We have a house guest

My husband was cleaning for super bowl party. Sweeping out on the back porch, he turned around just in time to avoid the "shit bomb." Splatted on top of the glass topped table was the largest pile of bird poop. He's always finding evidence of our friendly birds and has never thought much about it but since this was rather fresh, he looked up to see if he could find the miscreant. 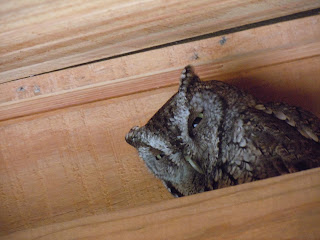 Perched in our eaves was a sleepy-eyed owl. Seems he's rather fond of our porch roof. Though you can't tell by this photo, he's rather small, about the size of my husband's hand. Too fun.
Posted by Ciara Gold at 5:00 AM No comments:

Texas has some of the most bizzarre weather but still, I won't complain - too much. Friday was quite the day. It dawned rather foggy and misted off and on, but the temperature was about 70 all day. Very pleasant for winter, which is what made that evening's storm so unusual.

I finished cooking around 6:30 and invited my son to come over to eat. Chili was a bribe to get him to look at my computer and help his dad move something heavy. He showed up right before 7:00 PM. The storm hit right after he arrived. He glanced down at his phone that had just signaled a message and said, "My Aggie Alert system says we're under a tornado warning." No worries. We went about our business inside the house knowing if we heard the "roaring train" sound we'd need to head for the hall closet.

Fifteen minutes after that, the rain fell in torrents, pounding the metal roof. My husband had already been next door to the rent house to make sure the gutter he'd just installed worked and the trenches he'd dug were helping to keep the one end of that house dry. So far, so good. But the thunder and lightening made us turn off computers.

Thirty minutes into the storm, the garage flooded. We rushed out to save anything that was on the floor that could be ruined. The water continued to rise. The boys braved the elements and opened the garage door from the outside about two inches and a woosh of water trailed toward the drive. Right after that, water seeped into our back room. Luckily, that room is under construction for remodelling and all we had were cement floors. 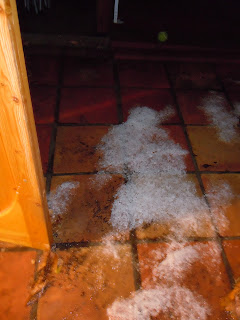 And that's when the hail hit. It hailed for a good five minutes. Hail with a diameter of nickle rained on the metal roof. We looked out the front door to check on the cars. Mine was parked on the curb under a tree limb. I was concerned the limb would break. DH laughed and said, the limb was protecting the dar from damage. My son's car was also under a tree limb. The truck, on the other hand, well -- it's just a truck so no worries, right?

Held captive in the house with no computers or TV for about 45 minutes, my son was at my disposal and I put him to work. We rearranged my office, moving around the computer stuff so it would be more efficient for writing. God, I love that boy.

But when it was over, check out the ice piles. Yeah, ice piles in 70 degree weather. Go figure.
Posted by Ciara Gold at 12:23 PM No comments: