A bookaholic when it comes to research

Okay, I confess. I'm a bookaholic when it comes to buying research books. Oh yes, I buy lots of romance also, but we'll save that for another day. Today, I decided to start my inventory project and I decided to begin with my office. 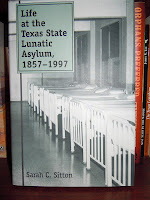 I knew I had lots of books but writing down the titles, authors and copyright dates on three shelves worth of books took all afternoon. But - I found some real treasures in doing so. Most of the books I buy come from Half-Price Books. I can spend hours just browsing for historical gems and it shows. I found at least 4 collectible books, books I bought for five or ten dollars but are worth far more. Doing a search of the books on a collectible site led to the discovery of these 4 jewels. So fun.

Books usually find their way to my place because they spark an idea, like the the book, Life at the Texas State Lunatic Asylum, 1857 – 1997 by Sarah C. Sitton. I always thought it would be fun to use an asylum as part of the setting for a book but never got any further than the idea.

I have a whole row devoted to the medieval times and Vikings. I also have a whole row on books that deal with writing like On Writing by Steven King and TheWriter’s Journey by Christopher Vogler.  I highly recommend both books. Astrology books also grace the top shelf as I find them useful in developing my characters along with a book on archtypes. Another row is devoted to just books on the old west from Texas Rangers to the Overland Trail to a Railroad Atlas. The bottom photo shows just a few of my research books. 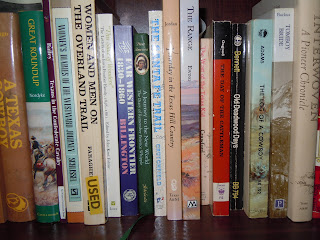 The fun part about doing the inventory is being reintroduced to books I'd forgotten about and letting those books spark ideas. Oh yeah, the ideas are flowing. Now to find time to write.

Yes, the Internet is a wonderful tool but sometimes I'd much rather do the research the old fashioned way.
Posted by Ciara Gold at 6:15 PM No comments:

So Tuesday, I was checking the ranking on books and I noticed a significant spike from the previous day. The book in question is The Keeper of Moon Haven and the site I was checking was Amazon.

Why? Not sure except that my publisher is attending the Calgary Expo where she's got a booth to sell books. Anyway, the ranking for this book was 570,000ish (can't remember the exact number) but let's say, it was just sleeping there on Tuesday, but Tuesday night when I checked (Yeah, I was procrastinating on writing), the ranking had risen to 76,000ish. Today, it had dropped some but still, I'm quite thrilled.

Of course, these numbers are rather intimidating to figure out so I did a search and found information on another blog site that's fairly easy to understand. http://www.rachellegardner.com/2010/10/what-do-amazon-rankings-mean-to-authors/

Anyway, thought I'd do a little plugging for this book in hopes that the ranking would improve even more. I realize it's an older book but I would love to get it back into the 1 - 10,000 rank if possible.

On the southern fringes of the Mendip Hills sits the Castle Hamingjur, an abandoned structure most fear haunted. Yet, on the rare occasions when the Hunter’s Blue Moon occurs, the Keeper occupies this mysterious castle where he guards the bridge to Alfheim Haven.


Noreen Willshire discovers more than fairytales hidden between the pages of Beletania’s diary. She opens the ancient book and finds a pathway to a Faery Realm where all manner of mythical creatures reside. In her naïveté, she summons the Keeper before his scheduled time in the human realm. In that brief moment, the mysterious wizard touches her soul with more than magick. She promises to return the diary during Mefylleth, a time when the barriers between the two realms melt away, but danger stalks her path. Torn between her desire to make a new life for herself in America and her growing love for the Keeper, she must bridge the gap between magick and time to follow her heart.
Available for Kindle
Posted by Ciara Gold at 5:03 PM No comments: