Life in the Fast Lane

Life in the fast lane just became a blur. Just to keep everyone updated, this is the time of the year when I basically go into Internet hibernation. In other words, I get so busy with stuff that it's hard to eek out time to post on the blog or even check email. Stuff means my other job. Most of you already know I teach art at a high school and it's contest time.

Well, contest time, Empty Bowls, Jr. time, youth art month time, art show time, art club time, and the list goes on. So our big art competition means getting students prepared to meet the judges. Empty Bowls, Jr. is an event we started in our area 4 years ago which allows art students to create bowls that go toward raising funds for our local school food pantries. (A lot of school districts and other art entities across the nation host an empty bowls event.) Youth art month is March and in preparation for YAM, I organize collecting art from our district art teachers to submit to our state organization for possible display at the state capitol. Keep your fingers crossed. :-)

Art club meets once a week and they've been commissioned to paint two murals and do 6 large 8'x 4' panels for decorations for a dance that raises money for scholarships, so yep - can we say busy.

And when do I write during all of this? I do continue to write but just not near as often as I'd like. Writing helps clear my head when I get stressed over all I have to get accomplished in a day. Writing keeps me sane.
Posted by Ciara Gold at 8:15 PM 2 comments:

Guesting @RB4U and talking about writing from the gut 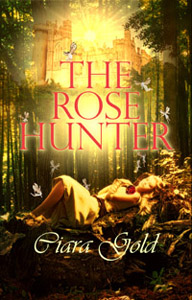 So I've prepared a guest post for Romance Books 4 Us and would love for folks to come visit. I'll be talking about the pros and cons of being a pantser though in truth, I think the term should be gutser.

As I've said before, guest blogging is a great way to explore more avenues for getting out information on books. I love it because I find great blogs this way and I love talking about my work.

By the way, I got a tweet from my publisher and The Rose Hunter will be coming to print. This is great news because she doesn't put things in print that haven't sold a certain quota. I'm pumped. A big thanks to all my readers. You all rock!!!
Posted by Ciara Gold at 5:00 AM No comments:

One of my favorites #SundaySnippet

I loved this story. In fact, Torin is one of those characters that haunts me still. I think of him at the oddest moments, like he's a living, breathing part of my life. I don't do that with all of my characters. Just the special ones. 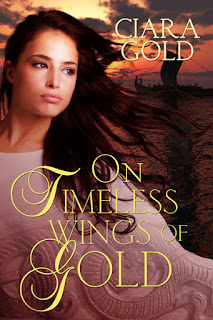 They say an eclipse yields a powerful force, an energy that can be harnessed by those with magic in their souls. On such a day when the sun disappears behind the shadow of the Earth, a mighty wizard evokes the elements of nature. With ancient, Celtic incantations, he sends an angel upon the wings of time to tempt a fallen king.
Angel Cashion is struggling to make ends meet and saving for when she can own her own repair shop in hopes of fighting her ex for custody of their daughter, but she is whisked away from home by a quirk of fate. Torin O’Faelain has spent the past two years enslaved by Vikings. A man of strong principles, Torin is committed to finding his way back to his native land and nothing will stand in his way, not even an angel from the future, but love and fate intervene.


Excerpt:
“Ye’re a bold one and have much to learn. Come.” He placed his large hand at the small of her back and gave a gentle shove. If he had to suffer her presence, at least she could perform duties befitting a woman. “’Tis time you earned your keep. A fine meal would no’ be amiss.
“You want me to cook?
“Aye.
She snorted. “Unless you have a ready supply of frozen dinners and a microwave, don’t get your hopes up.
He had no idea what microwave meant but didn’t feel inclined to ask.  Her tone implied an aversion to domestic chores, something he’d have to cure her of right soon.
They reached the hut, and he hesitated. “Did ye leave behind a husband? Wee bairns to care for?”
Instant pain filled her eyes. She turned her back and lifted the flap. “Nope. Not even a goldfish. At present the only love in my life is T-Bone.”
An odd stab of jealousy hit him at the mention of a love interest. He shook it off as nothing more than weariness. When she would enter, he stayed her hand. “Nay. I would set rules afore ye abide in my home.”
She dropped the rawhide and held up her hands. “Fine. Whatever floats your boat. I’ll play your way until it no longer suits me.”
The girl’s nonchalance and dismissive words stirred his anger. Suddenly having his own slave gave him a sense of power he hadn’t expected. Under Erik’s rule and now Rurik’s, he’d forgotten how it felt to be in charge, to make decisions and have no one gainsay him. “Slaves canno’ choose when to quit being a slave.”
“Did someone forget to oil your squeaky parts?” She tugged at her ear as if her hearing had deceived her. “You keep spouting the same nonsense.”
Nonsense? Did the girl not understand that certain things could mean life or death in this harsh land?
He grabbed her chin, forcing her attention. “Ye’ll obey my every command or find your stay most unpleasant. I ken that certain tasks might prove difficult, but I’ll no’ tolerate laziness or lack of respect.”
Angel’s eyes widened, and she nodded. “Yep, you definitely need the squeaky parts oiled,” she muttered beneath her breath.
Not fully understanding, he ignored her odd comment. She twisted from his grasp and followed him inside, her manner more subdued. If she only knew how her presence frightened him. Already, he felt protective of her, even attracted to her. The witch had cast a spell, one not to his liking.
“Only a weak man uses his physical strength against a woman.” She stroked her jaw with nimble fingers. “Are you weak?”
By the saints, she dared much. “Do you accuse me of being less of a man?”
“Touchy.” She glanced off to the side. “I’m not handling this—you very well. You’re overreacting to everything I say. Usually, overreaction is a symptom of fear.”
That she touched upon the truth made his insides curl.
A curtain of black hair swept across her back as she tilted her head and laughed. When she quieted, she pierced him to the core with her dark, brooding eyes. “I’m just as frightened as you. I suppose that gives us common ground on which to proceed.”
Available at Amazon and AllRomanceEbooks
Posted by Ciara Gold at 2:07 PM No comments:

Update for the new year and my many hats 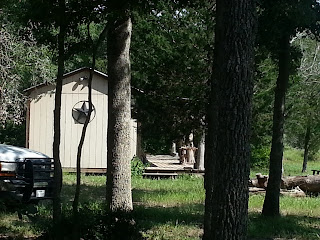 It amazes me how fast time flies. It's been two weeks since I last posted but it feels like it was only yesterday. There's a good reason why I haven't posted in two weeks. I've been busy.

I wear many hats. These past few weeks, I've been wearing a bandana on my head to protect my hair from paint and spackle dust. Yep, I've been playing carpenter. Hubby and I have been finishing out the insides of another cabin. I'm getting rather good at taping and floating. Spent a good portion of time sanding knotted pine boards and varnishing them. Today, I finished enough of the drywall to paint. We're hoping that by next weekend we can move in. It might happen. We bought property in the country and since June, we've been living in a travel trailer ( a very small travel trailer). We finished out one 12 x 24 cabin for an office/kitchen with small bathroom and now we're finishing out another for our bedroom/closet/bath. After that, we're hoping to have a small house built and then the cabins will be guest spots and my art studio. Can't wait.

So, tomorrow, I change my hat to that of teacher. It's my first day back after the holidays and the students and I are heading into contest season. That said, it might be a long time again before I post but .... I do want to post pictures on the new cabin once it's complete, so maybe I can squeeze in a little time.

And of course, there's the writer's hat, the artist's hat and the mom hat. With writing, I try hard to write a little each night even if it's only one sentence. The artist gets to play at school so that makes me happy. I'll have to share new art with all of you soon as well. I just bought a ton of pastel supplies so I'm very excited about getting into pastels again.

The mom hat never comes off. Son is back home for a bit before he goes back to a new job but he's been a lot of help with the construction project so I can't complain. I love having my kids home. Family is what makes life worth living. So for this new year, I plan to wear my hats proudly and make the most of my time.

Posted by Ciara Gold at 8:04 PM No comments: