I was never very happy with the cover I did originally for Julia's Golden Eagle. I just didn't nail the proportions mainly because I used three different photographs as resource. So -- I asked my husband to pose for me so I could tweak the proportions. I'm much happier with the results.

A good start to the painting 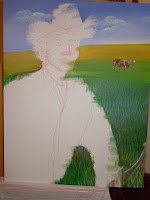 I thought it might be fun to take photos of a work in progress. I'm determined to get Eliza's Copper Penny up on Amazon within the week so I started working on the cover painting yesterday. I started by asking my husband to pose so I could have a picture of the body. I kinda messed up the proportions on Julia's cover so I knew I needed to start with a much better photo. Julia's Golden Eagle was made up from a whole bunch of images. Oh well, it still works but I knew I could do better. Anyway, here's the start in progression. 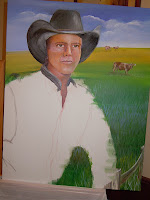 After sketching it first in chalk, I start by doing the background. I eventually ended up with the hat too tall so I had to add more sky. Bummer but it's okay. Anyway, I worked on the face next. I sorta did this from my own imagination and my husbands photo and ended up with a hero that looked a little like my son and a little like my very first boyfriend.

I didn't want the shirt to be all black so I added some reds in it. The shirt took the longest to paint due to the folds. And the black I used was old so a bit sticky. It spread nicely as long as I had white to go with it. 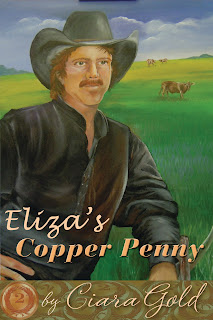 I love the immediacy of acrylic but I think I could make it look more photo realistic if I used oils. But I'm still happy with the result. For the various coins, I've been using photoshop. I didn't want to use the real thing as I though just a vague idea of the coin would be better. I'm hoping each book will also have a sense of the various seasons. This one is for spring, Julia's Golden Eagle is for Fall and Sarah's Brass Token is for Summer. When I get around to doing Kaitlin's Silver Lining, I'll try to capture winter. As that book isn't as tightly connected as these first three, I'm not in as big of a hurry to get it out. With my schedule, I'm hoping for March when I have spring break to work on it.

I'm working hard to revamp and tighten the original. I don't make big changes; I just want to take out some of the redundancy. If all goes as plans, my goal is to have it up tomorrow, but....
Posted by Ciara Gold at 2:48 PM No comments: