What I learned from watching Johnny Football

Tonight I watched the Ags rally together to win a football game in which they were trailing 21 points at half time. Indeed, the Duke team was very impressive the first half, but Manziel never lost faith in himself or his team mates.

No matter what you want in life, attitude is half the battle. I've had writer's block for about 8 months now. I've never suffered like this before and while I open up my current WIP each night and manage a sentence or two, I'm not really writing. I need to adopt Manziel's attitude and his spirit for winning. I need to focus more. So - maybe this is sort of my new year's resolution but I think it's more. What Johnny taught me isn't anything new but an affirmation of what I already knew and just shelved for the time being. Time to unshelve the go-get-em attitude and make some serious waves on this story.

That said, maybe I can give Manziel something in return, a reminder that education is more important than glory because glory can be short lived when you least expect it. Yes, I'm a huge Aggie fan and have been since I was a student there from 76 - 78 and perhaps part of me is selfish in wanting to see him stay and play two more years. But I'm old enough that it won't end my world if he does choose to go to the NFL. I will still cheer for the Ags no matter who plays. But as a teacher, I hope he chooses to stay for the education, for that degree, for the Aggie ring, for the diploma his mother will proudly frame one day.

Yeah, now you all know a little more about me. I regret that my degree isn't from TAMU but at the time they didn't offer art and it was the only thing that seemed to catch my interest. If I'd known I would one day become a writer also, I would have stayed for a degree in English or History but I don't regret being an artist and a teacher. Going to TAMU for the first two years gave me so many wonderful memories.

I was really proud of all the players tonight (including the Duke players). They showed the real spirit of what it means to be a team. Whoop!!!!
Posted by Ciara Gold at 10:45 PM No comments:

Spent the night in a Haunted Hotel for Christmas 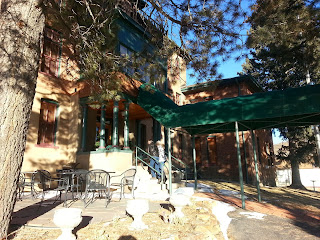 We spent four nights and four days at the lovely Hotel St. Nicholas in Cripple Creek, Colorado. We had a second floor room but my son spent the night on the third floor. He was the only one of our extended family who had an encounter and though both can probably be argued, I'll opt for the fact that he did indeed get visited.

On the first night there, he woke around 4:30 AM to the most horrid sulfur smell. (We joked that he was just smelling himself but he assured us the odor was outside the sheets.)  My daughter looked it up online and indeed one of the signs you've had an encounter is a horrid odor.

The next day, he went into his room, shut the door and went into the bathroom. When he came out, his door was wide open. The rest of our family swears they did not try to play a trick on him.

St. Nicholas was originally a hospital built by the Catholic Sisters of Mercy in 1898. There used to be an underground tunnel connecting the hospital to the nearby church so the nuns could travel to and from during bad weather. (Indeed, it was cold and snowy when we arrived.) The building served as a hospital until 1972. In 1995, the structure underwent major renovations and decoration to become the historic Hotel St. Nicholas.

The Hotel is said to be inhabited by two friendly but mischievous spirits and one unidentifiable anomaly. One is said to be that of a young boy, Petey, who is thought to have been an orphan who was cared for by the nuns. The other is a miner, known as "Stinky" who frequents the office area or back stairway. You're supposed to know you've been visited by him by his awful, sewer-like odor. I do believe he paid a visit to my son.
Posted by Ciara Gold at 12:38 PM No comments: